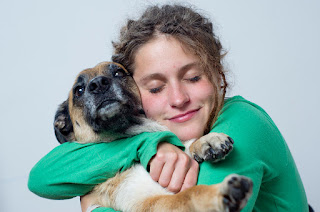 Dogs do more for us than make us happy by showing us affection. They actually change the way we ourselves show affection. We become less reserved around other  people and feel better about how we can contribute to our relationships.

SINCE HE WAS a young boy, Troy had been raised by his grandmother. He suffered from the loss of parents who were not an active part of his life.
His grandmother, June, and his aunts offered Troy their love, but they always worried that Troy felt like he didn’t really belong. Troy was ten years old when a medium-sized brown mutt showed up in their yard. Troy took the dog a bowl of water and food.
June was concerned that they might get too attached to a dog they knew nothing about, a dog someone might be looking for that very moment.
But she didn’t really think that was likely: the dog was so thin, and he attacked the food Troy gave him. It wasn’t long before the life in Troy’s face convinced her that the dog might well be just what he needed. Troy named the dog Zo after his favorite basketball player, Alonzo Mourning.

“It was like you flipped a switch,” June says. “Troy found something in that dog. Like they were kindred spirits. I think this really became his home when he could share it with Zo.”
People with dogs are 10 percent more likely to display their affection for other people than people without dogs. (Dickstein 1998)