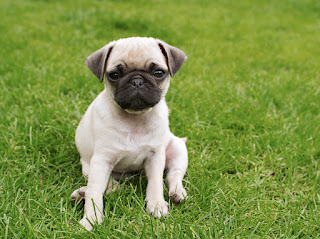 Bacchus - Greek and Roman Mythology - The god of wine and good times. Also called Dionysus. This dog will never spoil your good time. Baikal - A huge lake in Siberia. The world's deepest freshwater lake. A great name for your Siberian Husky dog. Bailey - French - A bailiff or steward. Baird - Irish - A traveling ballad singer. This boy dog likes to roam around and bark. Balboa - A Spanish explorer who discovered the Pacific Ocean. A wonderful name for your water-loving
dog. Baldwin - German - A fearless friend and protector. This boy dog will lay down his life for his master. Balfour - Scottish - One who hails from the pasture land. A good name for any shepherd breed dog. Ballard - German - Strength. Baloo - The big bear character in Disney's Jungle Book. Balthasar - Greek - May God protect the king. Bambino - An Italian child. Bancroft - English - A person from the bean field. Bandit - "I just made off with the neighbour’s kitten." Banjo - He's your favourite little banjo boy. This name sent in by Lori and her special Boxer dog. Bantam - A small, spirited fighter. Banzai - The hyena in Disney's The Lion King. Bard - Irish - A poet. Barkley - English - The man from a birch tree meadow. Barlow - English - A person who lives on the bare hill. Barnabas - An early Christian who introduced St. Paul to the 12 Apostles of Jesus Christ and the patron saint of Cyprus. Barnaby - Aramaic - Son of sympathy. Barney - He loves you and you love him. Barnum - P.T. Barnum was a famous American promoter and showman of the
19th century. Baron - A European nobleman. A logical name for your distinguished pure-bred boy dog. Barrett - German - Bear-courage. Barry - Irish - An expert with a spear. Bartholomew - One of the 12 apostles of Jesus Christ and the patron saint of plasterers. Barton - English - A landowner. Bashful - This dwarf-dog likes to hide. Basil - Latin - Royal. This male dog comes from champion blood lines. Basil - A 4th century saint who was tortured and martyred for his preaching against the pagan gods. Baxter - English - A baker. Bazooka - "Even dogs like to chew
bubble-gum sometimes." Bear - This dog is big, round, and cuddly. Beast - A mean-looking boy dog with a heart of gold. Beau - French - A very handsome man. All the girl dogs think he's hot. Beaufort - French - A beautiful fortress. A fantastic name for the pure-bred guard dog. Beaumont - French - A beautiful mountain. A wonderful name for any purebred large dog. Beck - English - A brook. This boy dog loves flowing water. Beckham - This dog enjoys chasing soccer balls. Beecher - English - One who lives by the beech trees. Beeman - English - A professional beekeeper. Bellamy - French - Your pretty friend. Benedict - Latin - A blessing. Benedict - The patron saint of those who have been poisoned. Bengal - "My brindle coat looks just like a tiger's." Benito - Spanish - A blessing. Benjamin or Ben - Hebrew - The son of my right hand. This boy dog will be your valued helper. Benjamin - A 5th century saint who was tortured and impaled by the Persians for preaching his Christian faith. Benoni - Hebrew - The son of my sorrow. A wonderful name for the dog
that you adopt to replace another dog. Benson - English - Son of Benjamin. Berkley - "I'm the most liberal dog on the block." Bernard - German - A person that's as brave as a bear. Bernard - A mouse in Disney's The Rescuers. Bernard - The patron saint of candle makers and skiers. Bernardine - The patron saint of advertising. Bishop - "I always stalk my prey diagonally." Bjorn - Swedish - Courage of a bear. Blackjack - "I plan on living to the age of 21." Blaine - Irish - Lean. This male dog
keeps himself in good shape. Blair Irish - Of the field. A great name for any sporting breed of dog. Blaise - The patron saint of those with throat problems. Blake - William Blake was a great English poet who died in 1827. Among his works are Songs of Innocence and Jerusalem. Blitz - This dog comes at you from all angles. Blizzard - A forceful, solid-white dog. Blue - Old faithful. You could set your watch by this boy dog and never be late. Bluto - "I have more than just a good pair of forearms." Bogart, Bogey - This boy dog has a scruffy sort of charm.
Bojangles - A good name for a Cocker Spaniel dog. Bolivar - A Venezuelan revolutionary who led forces against the Spanish rule of South America. Bombay - An Indian port on the Arabian Sea. Bonsai - A runt of a dog. Boo - "I sometimes bump into things in the house at night." Boogie - "I could have danced all night." Boomerang, Boomer - "I'll always come back to you." Boone - "My abilities to live off the land are legendary, but please feed me anyway." Boreas - Greek Mythology - The north wind god.
Boris - Slavic - A proud fighter or warrior. Boris - The patron saint of Moscow. Boss - "Baby I was born to run." Botswana - An African country. Boyd - Irish - Fair haired. Bozo - The circus beckons this boy dog. Bradley - English - Broad meadow. Brady - Irish - Fiery one. This male dog is full of passion. Brahma - The Hindus believe that Brahma is the spirit who created the Universe. Brando - He could very well be a contender. Bravo - "I deserve praise all the time." Brendan - Irish - A sword. A good name for any guard dog.
Brendan - The patron saint of sailors. Brian - Irish - Strength. Brice - Welsh - A person who is awake, alert, and highly ambitious. This boy dog never sleeps while on duty. Brock - English - A badger. Bronco - This boy dog can't be tamed. Bruce - "I was born in the USA." Bruiser - "I love the smell of a good dog-fight in the morning." Bruno - The dog in Disney's Cinderella. Brutus - An exceptionally large dog who stands his ground. Bubba - "I'm just a big ol' redneck." Buck - The prototypical male dog. Bushido - The code of conduct of the Japanese Samurai. A great name for your Oriental breed of dog.
Butkis, Butkus - "There's nothing like tackling my master." Buzz - This boy dog is light-years ahead of any other dog. Byron - French - From the country.
Male Dog Names